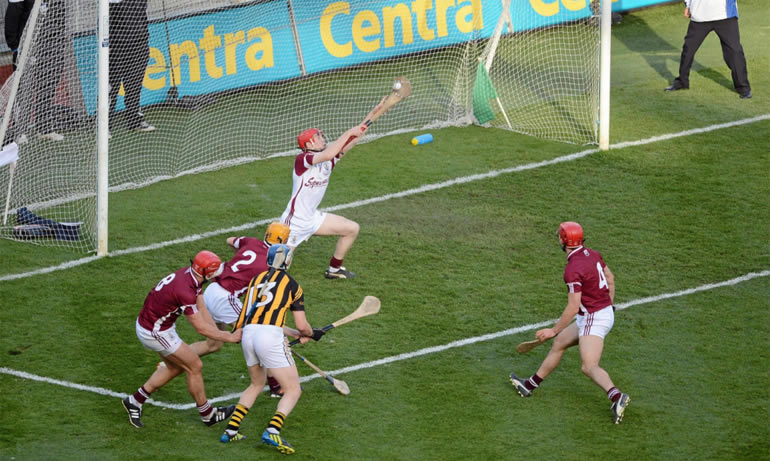 Update 17th August 2015
In the second semi-final at Croke Park on Sunday 16th August, Galway defeated favourites Tipperary to qualify for the All Ireland Hurling Final. The margin was just one point after a fierce battle in which the outcome was in doubt until the last minute. Most of the pundits have said that this was the best game of the season and perhaps of the decade.
So, Kilkenny and Galway fans, book your accommodation now before it is too late!

Update 10th August 2015
Despite a brave effort by underdogs Waterford, Kilkenny emerged winners by a margin of 6 points in the All Ireland Hurling Semi-final at Croke Park on 9th August and are the first team to qualify for this year’s All Ireland Final.
So it is time for Kilkenny fans to start making plans for Sunday 6th of September.

Is Hurling the fastest team sport in the world? It is generally thought that it is, but who has measured it?
It is certainly much faster than the other main Gaelic Athletic sport, football, and lightning fast when compared to its distant cousin, hockey.

It is a really exciting, physical, highly skilled sport played throughout Ireland and now at numerous locations throughout the world. It was largely unknown outside of Ireland until fairly recently but its popularity has grown steadily and many of the top championship games are broadcast worldwide on Sky TV.
Apparently, Queen Elizabeth is a fan of hurling. She told GAA president Liam O’Neill that she watched it on Sky and was very impressed!

All 32 counties on the island of Ireland have hurling teams whose ambition is to win the All Ireland Final. For some it is no more than a dream as, realistically, there are only a few teams with a good chance of winning. These include Kilkenny, Tipperary, Cork, Galway, Waterford, Clare, Dublin and Limerick.

This year only four teams are left at this stage: Kilkenny, Waterford, Tipperary and Galway. All the rest have been eliminated already and their hopes dashed for another year.

In this year’s semifinals which will be played at Croke Park the line up is:
Kilkenny v Waterford on 9th August.
Tipperary v Galway on 16th August.
The winners go on to contest the All Ireland Final, also in Croke Park, on 6th September.

About 80,000 fans will fill Croke Park for the final amid a sea of county colours, flags and banners with singing, chanting, whoops of delight and groans of despair ringing around the stadium.
As soon as the contestants for the final are known, the scramble for tickets will begin with many fans ending up disappointed without a ticket. Many without tickets will still go to Dublin in the hope of picking up a spare ticket somewhere but most will have to watch it on TV in a pub or hotel.

Kilkenny have won most All Ireland Finals (35) and have dominated the last decade winning 7 from 10 in that period. But, although they are hot favourites to win again this year,  some of the others are snapping at their heels and any of them could win. Waterford are this year’s surprise package and could be the dark horse to overthrow the favourites.

As soon as the finalists are known, as well as the rush for tickets, there will be a huge demand for accommodation. Although the majority of fans return home after the match a large number will remain in Dublin to celebrate or drown their sorrows.

Accommodation will be at a premium. The hotels nearest to Croke Park will be full. Anyone thinking of staying in Dublin City Centre area on that night would need to book well in advance to be sure of a place to stay. Otherwise you will have to stay further away from the venue.