If you want to visit an exhibition that’s different to anything you’ve ever seen before, then Animal Inside Out may very well just be what you’re looking for.

Until August 9, you can inspect over 100 dissected and preserved animals at the Ambassador Theatre. These creatures are part of the Animal Inside Out exhibition, created by Dr. Gunther von Hagens and his wife, curator Dr. Angelina Whalley. 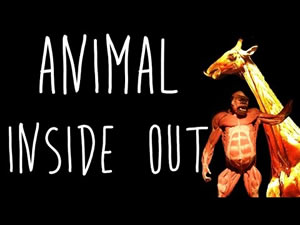 All of the specimens have been plastinated – a body preservation method created by Dr. von Hagens himself, whereby after removing external tissue and fur, the bodily fat and water contained within are also removed. Water is replaced with silicon, so that each individual cell which previously contained water now contains silicon. This preserves the cell structure and allows one to see into a body, along with its muscles, nervous system, organs and skeleton. Curing with light, heat or gas makes the body rigid and allows it to stand upright or strike a particular permanent pose.

In this innovative way, audiences are given the opportunity to be rightly impressed by the awe-inspiring physique of a 120 kilo gorilla, the evolutionary triumph of an elephant’s trunk, the beauty of a shark and the truly unique nature of a giraffe’s neck. 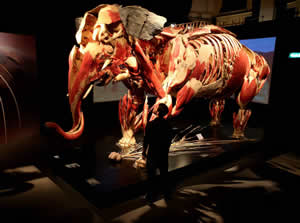 The creators want to stress the suitability of this exhibition for all the family – they hope that being able to see the internal structure of these animals will lead children to have a deeper respect for them. They also hope that by comparing and contrasting human and nonhuman bodies side by side, one can appreciate the similarities and differences inherent in both.

The creators also are at pains to point out that no creatures were harmed or killed in order to create this exhibition – they were procured by collaborating with veterinary departments in a range of universities, zoos and sanctuaries. Indeed, animal rights groups have said that they support the aim of this initiative – teaching young and old how important it is to protect these animals from cruelty and, in the cases of some, extinction. 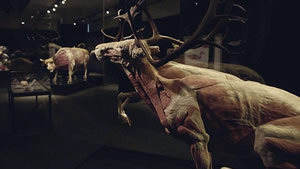 Along with the animals on display are human specimens, also plastinated. These humans originally featured in Body Worlds, the first exhibition created by Dr. von Hagens and Dr. Whalley which debuted way back in 1995, in Japan. This world-famous exhibition, whose main focus was human anatomy, was made possible by the generosity of those who donated their body to science via the body donation program organised by the Institute for Plastination. Although it attracted a fair share of controversy, nevertheless Body Worlds has been visited by millions of people on its various world tours.

Most of the animals on show at Animal Inside Out have never been seen before, but some were first displayed as part of the Body Worlds exhibition.

Animal Inside Out Opening Times

Animal Inside Out has been running since March 12 and must finish on August 9.
Location: Ambassador Theatre, Parnell Square South, Upper O’Connell Street, Dublin 1
It is open daily from 10.00am to 7pm.
Adult admission is €14, students / pensioners €12, under 15s and the unemployed €8 and children under 4 are free.