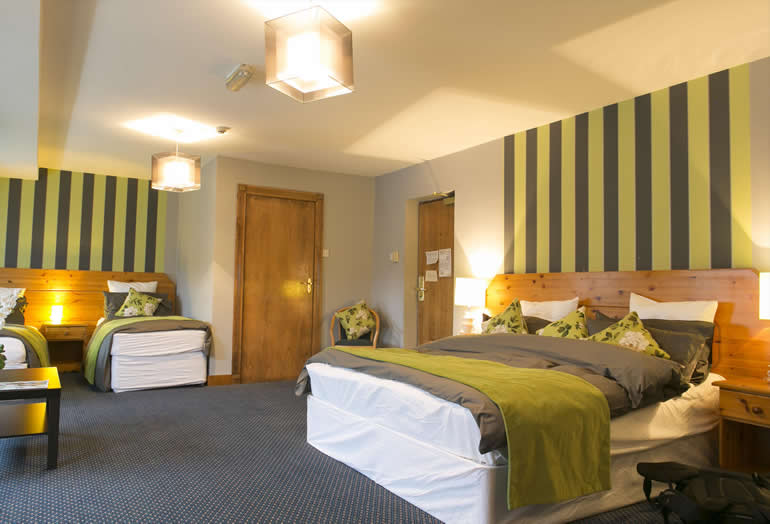 The Camden De Luxe Hotel, which appeared in the Alan Parker film “The Commitments”, dates back to 1957, when it was called the Theatre De Luxe. The listed building that is its home has now been stylishly renovated, with the vaulted ceiling and décor having being painstakingly restored, but the façade remains as it was when the theatre closed. Today the very popular Palace Nightclub stands in place of the original theatre auditorium.

The 2 star Abbey Hotel is an elegant hotel in Dublin’s city centre. A full choice of complimentary facilities can be found in all of its attractive en-suite bedrooms. It also houses The Black Abbot, on three floors, and the Abbey Hotel restaurant, which offers an eclectic mix of Irish and world dishes on its selection of menus. The shopping precincts of O’Connell Street, Grafton Street and Henry Street are all nearby. The Garden of Remembrance, GPO, Christchurch and Trinity College are just some of the many attractions to be found nearby.

For over 70 years the Lucan Spa Hotel, located on the N4 motorway at Junction 4A, has been charming customers and acting as a gateway to both Dublin City and Dublin Airport. Its copper roof tower has made it a landmark. This refurbished hotel now has satellite television and Wireless Internet / Wi-Fi access in all of its 70 well appointed en-suite bedrooms, in addition to banquet and conference rooms with a capacity of up to 600. The Earl Bistro is open during the day to serve top quality food, and in the evening the Hanora D restaurant will cater to all of your culinary needs. Alternatively, one can have a quiet, relaxed drink in The Ballyneety Bar, situated in the oldest part of the hotel.

Ideally situated in the pretty village of Chapelizod is the West County Hotel, now providing a friendly welcome for over 40 years. This warm and friendly family run establishment is a stone’s throw from the Phoenix Park, one of Europe’s largest. It is locally famous for its great value, with 50 guestrooms, comprising a mix of very comfortable single, double, twin and family rooms. Of utmost priority is the comfort of their guests; their duvets and pillows are specially designed to ensure a good night’s sleep. Wi-Fi access is available throughout the hotel.

The West County Hotel is also in a magnificent location, as although it is just 6 km from the city centre, with everything that a visitor could wish for in the way of entertainment, food, culture, history and shopping, the Phoenix Park is an easily accessible escape from this cosmopolitan hive of activity when one needs some peace and quiet. Its West Dublin location beside the N4 also opens up the possibilities for exploration to be found in the West of Ireland, and its proximity to both the M50 (Junction 7) and Heuston Station means the visitor can quickly venture to attractions all over greater Dublin, such as the beaches of Donabate and Rush and Ardgillan Castle, amongst countless others.