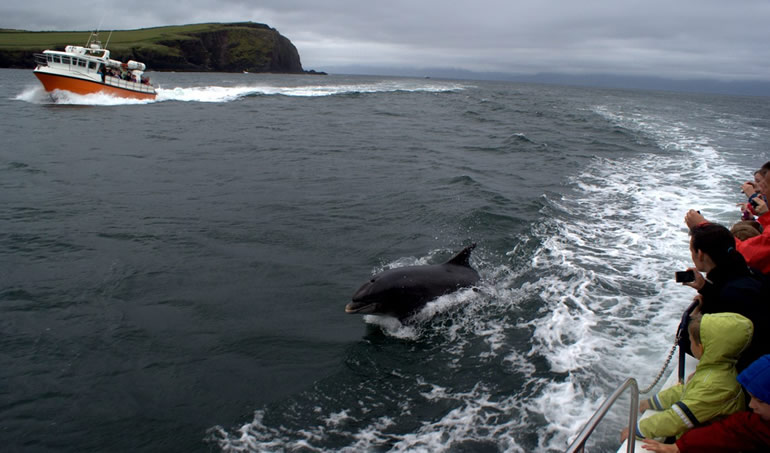 Dingle is a favourite holiday destination for tourists from home and abroad. It is located in the most westerly part of Ireland in a region of beautiful mountain and coastal scenery.

Dingle had been a fishing town for centuries but more recently its main industry is tourism. Some fishing still goes on and fishing boats of all sizes are frequently berthed at Dingle pier unloading their catch.

One of Dingle’s favourite visitor attractions for the past twenty years is Fungi, the Dingle Dolphin. Fungi is a dolphin who lives in Dingle harbour. Nobody knows how long he has been in Dingle but he was first spotted in 1984 escorting the Dingle fishing boats into and out of the harbor. By mid 1984, Department of The Marine manager Kevin Flannery had made a note of the dolphin as a permanent occupant of Dingle harbour and self-appointed pilot of the fishing fleet.

The dolphin was named Fungi and over the next few years and lots of study Fungi became less shy of humans so that swimmers could swim alongside him and play with him in the water. There is no definitive answer as to why he was christened Fungi (sometimes spelled Funghi or Fungie) but some say it is because he is a ‘Fun Guy’.
As his fame spread, many more tourists came to see him and this gradually grew into a local industry. Nowadays there are a number of boats working in Dingle whose exclusive job is to carry visitors to the mouth of the harbor to see Fungi. Fungi has a welcome for everybody but apparently he has a slight preference for females. Swimmers, divers, canoeists, windsurfers, or children have a great time when they meet Fungi.

In the Summertime Fungi feeds on fish in the harbour mouth. He has often been seen catching a species called the Garfish which was not known to be on the dolphin’s dinner menu. In Winter Fungi must go to more distant waters for nourishment.

Fungi has been identified as a bottlenose dolphin. He probably consumes about thirty kilograms of food each day. So Fungi, equipped with state of the art sonar and a turn of speed which leaves Atlantic salmon standing, has only the local fishermen to compete with for food. If it wasn’t for the endless supply of food available here, it would not be so easy for him to live comfortably within such a small area and to spent most of the time enjoying himself.

Fungi is the No. 1 untamed cetacean tourist attraction worldwide. The number of visitors is unknown but by now it has certainly reached hundreds of thousands and this is a world record for a single wild animal of any kind. The economic benefit to Dingle is just a guess but is probably 10s of millions of euros.
There are many videos on Youtube of visitors having fun with Fungi.