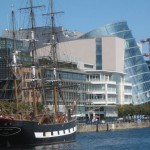 The first Jeanie Johnston was built in the year 1847 on the banks of the St. Lawrence River in Quebec, Canada and was purchased in Liverpool by Donovans from Tralee. The famine was raging in Ireland in those years, driving many of the starving native population to leave Ireland. Donovans operated a lucrative trade between 1847 and 1855 bringing exiles from Tralee to North America and coming back with merchandise for END_OF_DOCUMENT_TOKEN_TO_BE_REPLACED