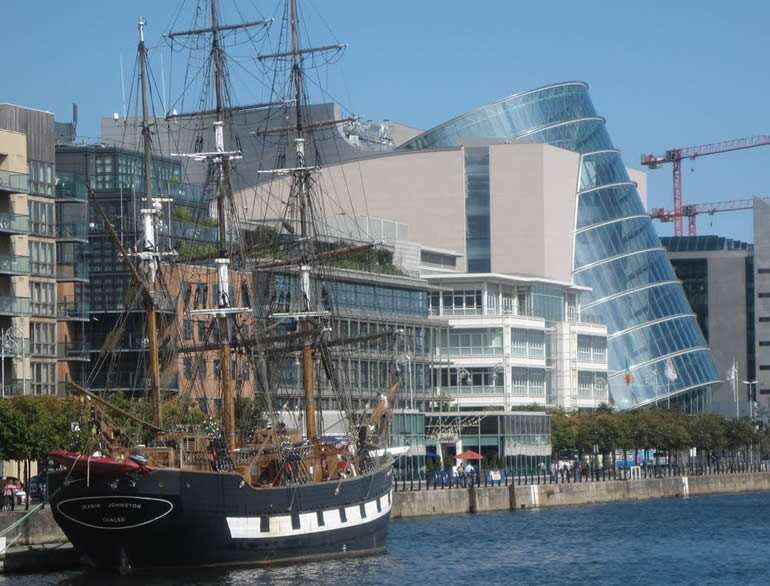 The Jeanie Johnston at Dublin Docks

The first Jeanie Johnston was built in the year 1847 on the banks of the St. Lawrence River in Quebec, Canada and was purchased in Liverpool by Donovans from Tralee. The famine was raging in Ireland in those years, driving many of the starving native population to leave Ireland. Donovans operated a lucrative trade between 1847 and 1855 bringing exiles from Tralee to North America and coming back with merchandise for Europe.

The Jeanie Johnston’s maiden voyage took place on 24th April 1848 when she set out from Blennerville near Tralee to Quebec with 193 passengers on board. During the subsequent years the ship made many more journies to North America carrying more than two and a half thousand emigrants. The Jeanie Johnston was one of the better run emigrant ships – many ships carried passengers in appalling conditions.

In confined conditions in the steerage of the ship, up to 250 frightened strangers found themselves together. Many had never seen a ship and were totally unaware what was in store for them, and the only thing which they shared was their purpose to flee from the hunger and death caused by the famine.

Accommodation on board was austere, made up of bare planks, where passengers were crushed tightly together, with four adults fitting into a 6 feet space. In spite of the long journey in desperate conditions, there were no fatalities on the Jeanie Johnston.

The new ship was designed by Fred Walker, former Chief Naval Architect with the Maritime Museum in England.

The building of the ship commenced in 1993 in a new boatyard at Blennerville near Tralee and was finalized in 2002. The ship constructed from larch planks on oak skeleton, and was built to the original specifications as far as possible. However there were some differences which had to be included to comply with modern safety standards.

An international workforce of young people, coming from the North and South of Ireland from both Protestant and Catholic traditions, the USA, Canada and other countries, built the copy of the ship supervised by experienced shipwrights. This forward thinking enterprise demonstrated how young people from all religious denominations could collaborate in peace.

Since completion in 2002, the Jeanie Johnston has visited most of the ports in Ireland, including Dublin and Belfast, and has been greeted with excitement by the many visitors who have gone on board and understood what life for the passengers was like.

In 2003 the new Jeanie Johnston left Fenit Harbour in County Kerry to start on a journey across the Atlantic to recreate the voyage of famine times. It landed in Florida on April 15th and then went on an 8 month tour of ports along the East Coast of the USA and Canada before to returning to Ireland in October. During 2004 and 2005 she made many passenger and crew voyages around Ireland, to the UK and Europe.

The Dublin Port Authority procured the Jeanie Johnston in 2005 and its main function is now a museum and visitor centre. She is now located in Dublin’s docks and is open daily to visitors.
You get a really good impression of life on a famine ship on the tour.. Most visitors say that this is a very worthwhile tour.

Visitors to Dublin can find Dublin Hotels at Dublin Overnight and visitors to Tralee can find Tralee Hotels and Tralee Bed and Breakfast at Stay in Kerry.