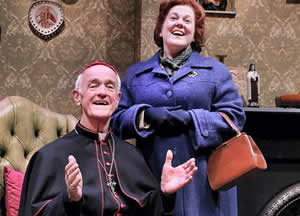 Date: 27th Jan 2015 to 14th Feb 2015
Venue: Gaeity Theatre
MOLL is a comedy set in a  presbytery in County Kerry where Moll is a priest’s housekeeper who takes over the running of a parish house setting off the parish priest and curates against each other with chaotic and sometimes hilarious consequences. John B Keane at his best.
Cast includes Frank Kelly, Des Keogh and Mary McEvoy

Date: 3rd Feb 2015 – 14th Feb 2015
Venue: Bord Gais Energy Theatre
JESUS CHRIST SUPERSTAR, the long running rock opera by Tim Rice and Andrew Lloyd Webber returns to the stage in 2015 in a brand new production.
Glenn Carter, star of Whistle Down the Wind, Les Misérables, Joseph and the Amazing Technicolor Dreamcoat plays Jesus, a role he played in the West End, on Broadway and on film.

This contemporary interpretation of A Midsummer Night’s Dream centres on the residents of a nursing home. Shakespeare’s original text shines through in this production which features original music.

Ireland take on France in this RBS Six Nations Rugby fixture which is set to be one of the highlights of the 2015 calendar at The Aviva Stadium.

Date: 16th Feb – to 28th Feb 2015
Venue: Gaeity Theatre
Ireland is in the middle of an economic boom in the year 2022 in a repeat of the Celtic Tiger era. With a property bubble in full swing, Bertie Ahern is set to become Taoiseach again at the age of 71. This is the setting for the shenanigans of Ross O’Carroll-Kelly and his middle-class rugby family.

Date: 21st Feb 2015
Venue: 3Arena (formerly the O2)
The Coronas are at 3Arena on Saturday 21 February 2015 to celebrate the announcement of their new studio album,.
This band have sold out shows at Marlay Park, The O2, Royal Hospital Kilmainham and The Olympia Theatre so get your tickets fast!

Just a few of the best of whats on in Dublin February 2015.