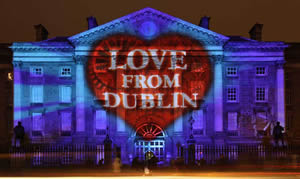 Happy New Year to All Visitors to Dublin!

Tourism forecasts suggest that visitor numbers to Ireland are set to continue to increase in 2015 with even greater numbers visiting the capital. Dublin has a wealth of attractions and reasons to visit and no matter what your preferences there is always something to do in this city.

Here are some of the events in Dublin at the start of 2015:

Draiocht’s take on the evergreen Christmas pantomime Jack and The Beanstalk.
Fun for all ages  as things are not going well in Happy Valley where Mother Magee and her son Jack live. All the crops and animals are going missing including the King’s hen that lays the golden eggs. A laugh a minute to start off the New Year. 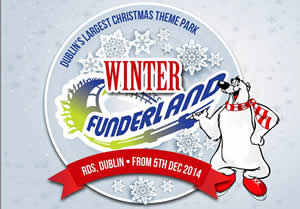 Date: 5th of Dec 2014 to 11th of Jan 2015
Venue: RDS Simmonscourt, Ballsbridge
Winter Funderland aims to capture the magic of Christmas. A festival of family entertainment in one location. Funderland – Europe’s largest indoor theme park, iSkate on Ice-Ireland’s largest ice rink and Fossett’s exclusive Christmas Circus.
Winter Funderland will be a festival to delight the senses and capture the joy and fun of the season – all in one location at the RDS from December 5th 2014.
The event runs from 12 noon to 10pm from Monday to Friday. It’s open 10am to 10pm Saturday, Sunday & School Holidays. It will be closed on Christmas Day.
See more at www.winterfunderland.ie

She Stoops to Conquer

Date: 4th December 2014 – 31st January 2015
Venue: Abbey Theatre
Oliver Goldsmith’s ever popular comedy of deception and seduction, She Stoops to Conquer is at The Abbey Theatre. Hugely charming and humorous, this production is directed by Conall Morrison and is a nice escape for Christmas visitors to Dublin.

Check Accommodation near The Abbey Theatre

Date: 14th January 2015
Venue: 3Arena (formerly The O2)
This is part of the band’s Prepare For Hell’ tour.
“SLIPKNOT’s visually arresting, chaotic, spectacular shows often become the stuff of legend, so with all new masks and production, these events are essential!”

Date: 24th January 2015
Venue: 3Arena (formerly The O2)
This top Irishact is starting off their 10th Anniversary World Tour in the city where it all began. The show features a variety of Irish classics, contemporary numbers and classical favorites as well as some original compositions, performed in a unique smooth style for which Celtic Woman has become famous.

Date: 26th January –  to 27th January 2015
Venue: Grand Canal Theatre (Bord Gáis Energy Theatre)
Moscow City Ballet comes to the Bord Gáis Energy Theatre with their acclaimed production of Giselle, a ballet in which village girl Giselle goes insane and dies of a broken heart when it is discovered that her peasant lover Albercht is really a nobleman who is engaged to another.

Date: 28th January –  to 31st January 2015
Venue: Grand Canal Theatre (Bord Gáis Energy Theatre)
Moscow City Ballet comes to the Bord Gáis Energy Theatre with their production of The Nutcracker, a ballet set to the famous score by Tchaikovsky which features numerous famous pieces like The Dance of The Sugar Plum Fairy.